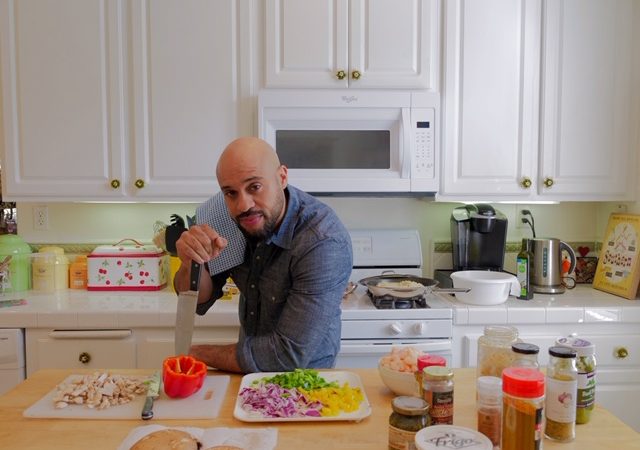 Hollywood actor and filmmaker Lewis T. Powell is a man of many talents.  Among those is cooking, which he does exceptionally well.   When he is not acting, ‘hitting’ the red carpet or working on a film project, he enjoys cooking one of his many signature dishes for family and friends; Curry Pesto Shrimp Bowl with Portobello Mushrooms Over Cauliflower Rice Pilaf.

Powell is best known for his work in the films, Kings, starring Halle Berry and Daniel Craig, CSI: Crime Scene Investigation and Squatters, starring Richard Dreyfuss and Gabriella Wilde.  His acclaimed short film, Padlock Men, in which he wrote, starred, directed, and produced has to date netted 28 ‘Official’ Film Festival selections with 17 wins and nominations for its depiction of the historically secret band of vigilante civil rights soldiers.

Doubling throughout the years as a master barber, filmmaker and musician with coast to coast experience from Washington, DC to South Los Angeles, Powell is proud to celebrate 16 years in Hollywood.

He is one of the most diverse talents in the entertainment industry.

Lewis, known as “Lew” to his friends is also a musician and artist, producing and releasing under his independent record company Col’Beast Entertainment as, “Big Lew.” He has worked with a plethora of artists like E-40, Too Short, Scarface, Born Jamerican Edley Shine, B-Legit and Nonchalant.

“Big Lew,” the recording artist’s stage name of actor Lewis T. Powell has also reached No. 2 on the Billboard’s Hot Rap Singles chart for over 18 weeks with his hit, “How We Do,” as “Big Lew BKA Popeye Reds featuring Nonchalant” in 2001.

When the topic of food comes up, Lewis eagerly shares his thoughts on the subject. He views himself as a passionate food connoisseur of sort and although not formally trained, enjoys the process of preparing a good meal. “When my family and friends enjoy what I cook and give me feedback about the food, hopefully positive (smiles), it makes me feel good.” says Powell.  “If I hear the words like “this is so amazing” or “this taste really good,” it makes me smile.” 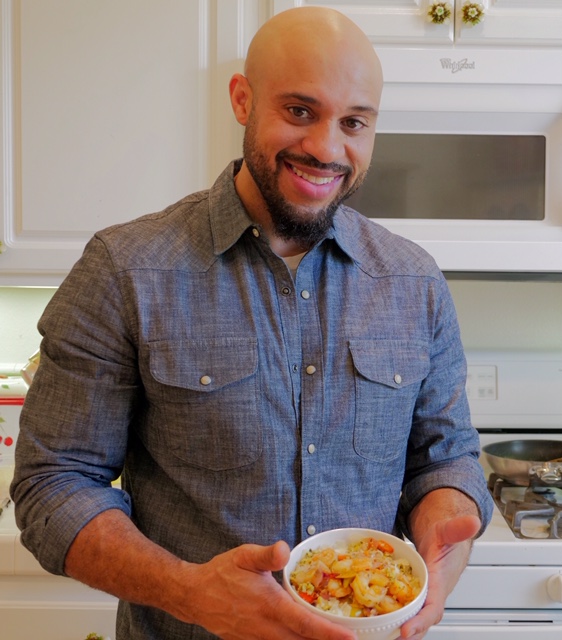 Lewis shares one of his favorite recipes –  Curry Pesto Shrimp Bowl. This mouthwatering recipe is delicious and easy enough to prepare on a weeknight.  Bon appetit!

This easy, spicy pesto shrimp recipe has lots of flavor thanks to the ingredient list: pesto, garlic, fresh basil and portobello mushrooms. It’s gluten-free, low carb, with good sources of healthy fat and packed with protein. 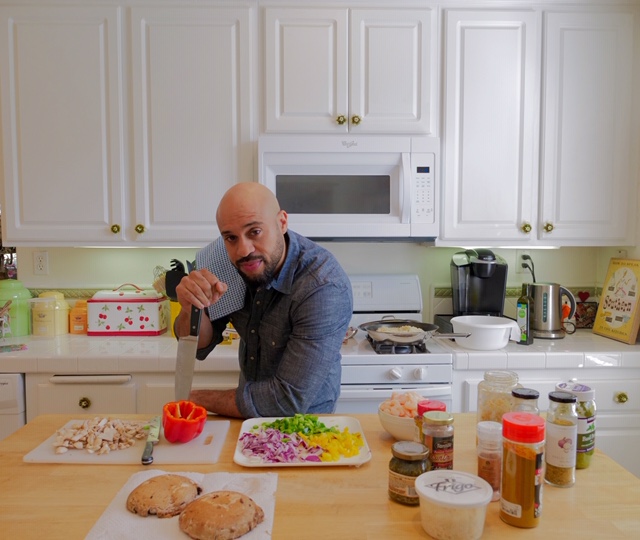 Heat large skillet on medium-high heat until hot. Add olive oil – it should run without sizzling. Add shrimp, cook for about 3 minutes, turning once midway, until shrimp is pink and cooked through. Remove shrimp from the skillet.

Add another tablespoon of olive oil to the same, now empty, skillet. Add sun-dried tomatoes. Add red, green and yellow peppers. Add minced garlic. Season with 1/4 teaspoon salt. Cook, stirring until the veggies release liquid and reduce in volume and get soft, for about a minute or two. Add back the cooked shrimp, stir and toss a few cycles fully mixing. Add 1/2 cup basil pesto and 1/2 cup chicken broth. Add remaining seasonings. On medium heat, mix everything to combine. Remove from heat. When ready to serve, top the shrimp with chopped fresh basil and shredded parmesan cheese.

Heat olive oil in a medium skillet over medium heat. Reduce skillet heat to low. Place mushroom caps in the skillet. Season with salt and pepper, cover, and cook about 5 minutes per side, until tender. Remove let cool and chop.

Cut the cauliflower into florets and transfer them into the grater tube of your food processor or use the large holes on a box grater to shred the florets. Set aside ( or buy the premade cauliflower rice bags to save time).

Add the broth (or water) to a small bowl and heat for 30-45 seconds in the microwave.

In a large skillet, heat 1 1/2 tablespoons of olive oil over medium heat. Add the onions and cook about 2 minutes. Stir in the turmeric, curry powder, cumin, garlic, oregano, salt add pan-seared chopped portobello mushrooms. Add the cauliflower rice and remaining olive oil and stir until well coated. Turn the heat down to a medium-low and cover tightly with a lid. Cook for 7-10 minutes, stirring every minute or so to prevent browning or sticking. Last mix in chopped portobello mushrooms. Remove from heat and serve.

Learn more about Lewis at www.lewistpowell.com.