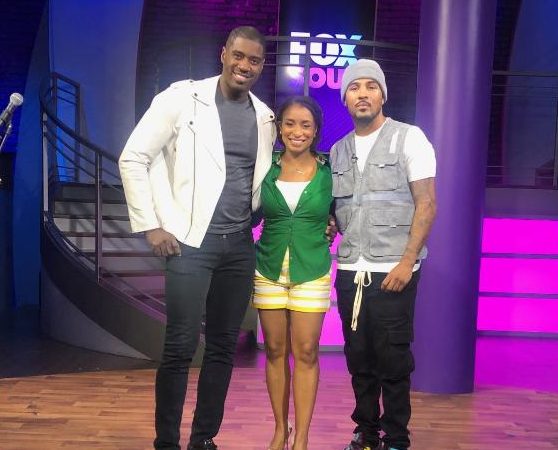 (Nationwide) – The multi-talented R&B hit maker and actor, Anthony Lewis stops by the Tammi Mac Late Show on Fox Soul TV to talk about his starring role in Tyler Perry’s Madea’s Farewell Play Tour, his new music and journey as an actor in Hollywood.
Lewis, born in Los Angeles to parents who passed down their singing and acting talents continues to shine and carve out a name for himself in the entertainment industry. At any given day, which is daily, you can find Anthony running his lines with cast members or in the studio working on new music. If he isn’t in the studio, you will find him either in the gym or playing his favorite sport, ‘basketball.’ You might even catch him playing in a pick-up game with his friend Chris Brown and other like-minded artists in the business.
Active as an entertainer since he was a toddler, the clean-cut Lewis developed his voice in the church. As a teenager, he built a following on YouTube through uploaded covers of contemporary pop hits such as Bruno Mars’ “Grenade” and Frank Ocean’s “Thinkin Bout You.”. His debut single, a blend of 2 Chainz’ 2012 hit “I’m Different” and Soul for Real’s 1995 R&B classic “Candy Rain” — with a guest appearance from rapper Billy Bang — was released in February 2014. Anthony has also had a hit song, “It’s Not My Fault” featuring the King of South himself, rapper T.I.
With influences ranging from Chris Brown and Justin Timberlake to Michael Jackson, Lewis’ stage presence and performances is undeniable and draws you into his world. The consummate artist and actor is thankful for every opportunity provided to him. “I think everyone who has helped me along my journey in life, including every opportunity and words of wisdom given to me,” says Anthony. “I have an amazing support team and feel very blessed to have good people around me,” he adds.
The Tammi Mac Late Show is hosted by Tammi Mac who brings her radio personality to FOX SOUL where she interviews celebrities and influencers in the entertainment industry. Her show airs Monday through Friday and streams live at 9 pm on foxsoul.tv
Click below to watch Anthony’s interview on Fox Soul TV:
https://www.youtube.com/watch?v=jh9gJK4ln3I