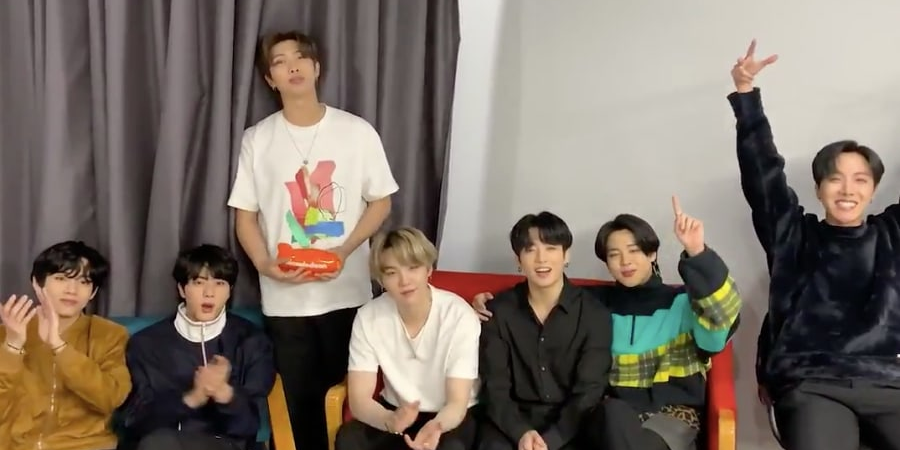 We celebrated together at The Nickelodean Kids’ Choice Awards 2020 which streamed live due to the COVID-19 pandemic on Saturday May 2 with Victoria Justice hosting a remote evening of performance clips, winners and green goo.

The awards and performances were presented remotely in lieu of having audiences and performers attend an in-person event.

BTS won Favorite Music Group at the Kids’ Choice Awards, and a clip of the group accepting the award was shared during the virtual ceremony.

BTS, an acronym of Bangtan Sonyeondan or “Beyond the Scene” has been capturing the hearts of millions of fans globally since their debut in June 2013. The members of BTS are RM, Jin, SUGA, j-hope, Jimin, V and Jung Kook. Gaining recognition from their authentic, self-produced music and top-notch performances to the way they interact with their fans, the band has established themselves as global superstars breaking countless world records. While imparting a positive influence through activities such as the LOVE MYSELF campaign and the UN ‘Speak Yourself’ speech, BTS has mobilized millions of fans across the world (named ARMY), topped prominent music charts, sold out worldwide tours including stadiums and has been named as one of TIME 100: The Most Influential People of 2019. The band has also been recognized with numerous prestigious awards like the Billboard Music Awards, American Music Awards and Nickelodean Kids’ Choice Awards.

BTS released their fourth studio album “MAP OF THE SOUL : 7” in February – a ‘must-have.’

Unveiled last year, the MAP OF THE SOUL series contains the honest and heartfelt story of BTS and their journey of discovering their true selves. The first chapter of this story, “MAP OF THE SOUL : PERSONA”, sang about the world and the joy of love, and the discovery of the self as it is displayed to the world; “MAP OF THE SOUL : 7” now turns inward to the shadow within in a candid acknowledgement that it, too, is part of the self.

“MAP OF THE SOUL : 7” looks back on the past seven years of BTS since their debut as seven members of one team. The journey was not always smooth sailing, and there were special travails that they had to endure in their rise as global superstars. Now, understanding that the scars left by those hardships is a part of their real selves, BTS accepts both “the self I want to show” and the “self I want to scorn” to at last tell their own story of finding their “real and complete selves”.

Bridging fine art and popular art through such initiatives as the global art project CONNECT, BTS and the “Black Swan” art film featuring a modern dance interpretation of the early-release track, BTS displays the group’s incredible talent and growth as artists through “MAP OF THE SOUL : 7”.

Congratulations, BTS on your win!