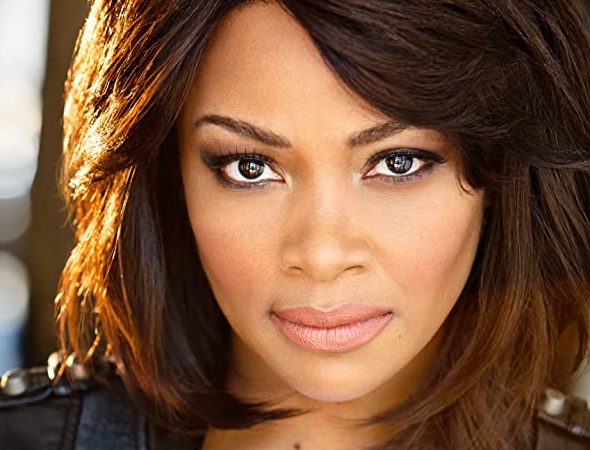 Rhonda Morman has long been one of our finest American actresses. She’s got nearly 20 years of credits under her belt, and a NAACP nomination.

The resilient thespian and storyteller is an NAACP nominated Best-Supporting Actress known for her outstanding work in the NAACP award-winning stage play, “Sunday Mourning.”

Her powerful performance as Shelby Brown the villain you love to hate in BET’s romantic comedy, Angrily Ever After on BET Her shows us why she is considered to be one of the most versatile actresses in Hollywood.

Rhonda’s story exemplifies the power of courage in the face of pain. She talks about how living and loving close up led her to taking the lead in life and on the screen.

She learned to eliminate fear from her mind early on after tragically suffering a gunshot wound to the leg. After being confined to a wheelchair and told that she would never walk again, she miraculously re-took her first steps at the age of eleven: steps that led to a successful career in the entertainment business.

This same spitfire determination that fueled Rhonda as an adolescent continues to propel her forward even today.

“Your mind can work for you or against you,” she adds. “You have absolutely 100 percent control over how you think, but you can’t leave it to chance. If you don’t proactively program your mind to work for you then by default it will subconsciously start to work against you.”

Considered to be one of this generation’s most respected and acclaimed talents, Rhonda has the undeniable ability of bringing complicated and charismatic characters to life-often with surprising tenderness.

In her first action film role, The Runners about human trafficking directed by Joey Loomis and Micah Lyons, Morman plays a villain.

Hollywood is already buzzing about her magnetic performance in the film, set to debut online worldwide and in theaters, July, 2020.

Morman says, she likes challenging roles that take you out of your comfort zone. “I believe that a mind once stretched never returns to its original dimension.” She shares, “ I believe a fundamental human need which we all need fulfilled at some level is the need for growth.

“The only difference between high achievers and the rest is they spend more of their time fulfilling this need by spending it in the growth zone.”

When the question of life came up, she chimed in and said, “I think one of the skills to master in life is being comfortably uncomfortable and having the determination to succeed by stepping out of your comfort zone.”

Rhonda continues to challenge herself which has led her to play the lead in many feature films including, “Bluest Moon” (Amazon Prime), “CainAbel” (Amazon Prime), “OLE Bryce” and “Stolen Breath the Truth Revealed (Amazon Prime).” Rhonda also had supporting roles in the feature films “Her Little Secret,” “The Choir Director,” “Throwback Holiday,” and “The Runners.” Shedding light on the pain and tragedy of addiction, she played the role of Delphine, a heroin addict, opposite of Loretta Devine in The “Lost Souls Cafe,” written and directed by Donald Welch, aired on TV One.

The multifaceted actress is also a recurring cast member on the Netflix Original family-friendly series, ‘Motown Magic’ and plays the role of “Grandma Ruby” produced by Motown’s legendary icon Smokey Robinson, currently on its second season.

She is thrilled to be nominated for Children’s Programming with NAACP Images Award (2019 and 2020).

Her notable theatrical stage play roles include For Colored Girls Who Have Considered Suicide/When the Rainbow is Enuf, Love Buddies, The Conversation, Blue God, Nylons, Angry Insecure Men, Save Us, The Things That Make Men Cry, Three Times a Lady, The Bachelorette Party and
Detours.

Beyond the stage, film, and television, Rhonda has been involved in several industrial films, commercials, and print ads. She has expanded her expertise to the web series realm by taking on roles in Wendy + Julian, a web series produced by Dennis Dortch of Black & Sexy TV, and The Choir, a web series written and produced by Issa Rae and Alright TV. She was also nominated for Best Supporting Actress in the LA Webfest for her reoccurring roles for two web series, What Men Want, and Black Boots, winning the award for the latter.

Rhonda is currently working on her life’s truth in her upcoming one woman show, Life Beyond the Chair, produced by REDFields Media Group.

As a philanthropist, Rhonda believes in giving back to her community, especially during the pandemic and says, “Helping others and making a difference in communities is what will help to make the world a better place.”

“One person at a time, one day at a time, and one project at a time, you can make a difference that will leave a lasting impact in your community.”

Rhonda and her husband Maxim Fields own and operate the Better Living Center Headquarters, a non-profit multi-purpose community center in Inglewood, California.

Stayed tuned to All Things Rhonda Morman by following her on: