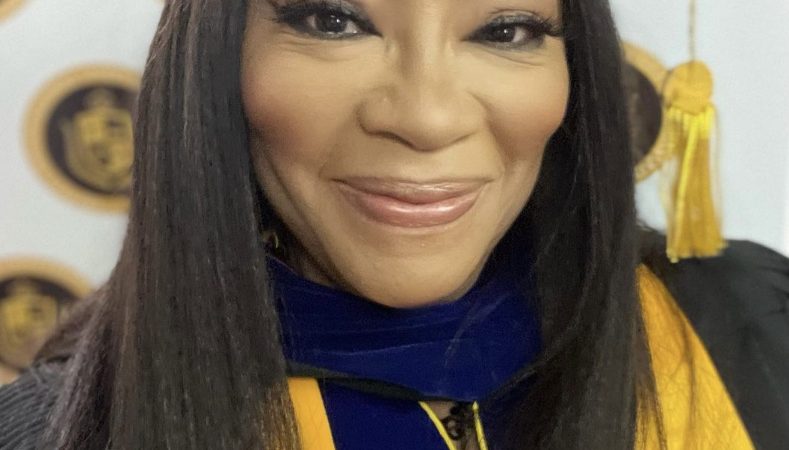 Jody Watley received her first honorary doctorate on Saturday, March 26, 2022.
The honor was bestowed upon the iconic singer-songwriter-businesswoman before she addressed the T.I.U.A. graduating class of 2022 in Stone Mountain, Georgia.
She received an Honorary Doctorate Degree Doctor of Philosophy in Entrepreneurship & Business Administration from the T.I.U.A. School of Business, an affiliate of Trinity International University of Ambassador. She was also presented the Women of Distinction Award from United Nations Global Women Foundation during the academic ceremony. click here to watch
The global chart-topping singer said at the packed academic ceremony, “It was an empowering and inspirational day amongst women making things happen in business as well as for their communities and through positive impact and influence to others.”
“We laughed, cried, prayed and cheered each other on now referring to each as Dr. Sister – in the spirit of sisterhood and women’s empowerment – perfect timing for Women’s History Month. To say it was a profound moment in my solo career would be an understatement. I could have never imagined this.”
“Thank you Dr. Jaqueline Mohair, Chancellor of T.I.U.A. who gave a riveting speech of many and the nomination committee for this tremendous honor.”
She added, “I am so humbled at this honor and thankful to God where all of my blessings flow regardless of the obstacles and naysayers.”
Dr. Watley is now in an elite group of women who have received Honorary Doctorates – among them Oprah Winfrey, Michelle Obama, Dolly Parton, Meryl Streep and Missy Elliott.
Jody Watley is a celebrated singer-songwriter-entrepreneur, GRAMMY-winning trendsetting pioneer in music, video, fashion and style. As a solo artist, the ageless pop and R&B singer has 6 Billboard Hot 100 Top Ten Singles, 13 Number 1 Dance Singles, 2 R&B Number 1’s, 15 Top 40 Singles, Gold and Platinum albums, 2007 Billboard Dance Lifetime Achievement and 2017 recipient of the Black Music Honors Crossover Music Icon Award.
In 2018, she is listed in Billboard as one of the Top 60 Hot 100 Female Artists of All Time and Top 25 Dance Artists of All Time. Her nominations range from the Grammys, American Music Awards, MTV Awards, NAACP Awards and Soul Train Awards.
Her blockbuster hits include “Looking for a New Love,” “Still a Thrill,” “Some Kind of Lover,” “Real Love,” “Friends,” “I Want You,” and many more.
Jody Watley is the first black woman and artist to release a million selling fitness video “Dance to Fitness.” In 1990, she has the distinction of being one of the first independently released artists and women in music when forming her boutique label Avitone Recordings in 1995 with a mantra of “Fueling Quality Music.” Watley is the founder of JodyWatleyShop.com. In 2000, she launched a signature line of luxury soy candles and other products promoting wellness and self-care.
Dr. Watley is featured in the March/April 2022 special edition of Courageous Woman Magazine, founded by Telishia Berry highlighting her extraordinary honorary doctorate honor. courageouswomanmagazine
TIUA School of Business offers the Entrepreneur Honor’s Program for entrepreneurs who have shown leadership and integrity in the world of business. TIUA School of Business is a member of the Association to Advance Collegiate Schools of Business.
TIUA School of Business has also been awarded the Outstanding Presidential Gold Award from President Joe Biden. The Honorary Doctor of Philosophy in Business Administration (Hon. Ph.D.) award conferred by TIUA School of Business is an Honor, which acknowledges and appreciates outstanding individuals who have made significant contributions to their community, at both national and international levels, and to a specialized field of knowledge and competency in business and entrepreneurship. For more information, visit trinitybusinessorg
You can follow her on social media @jodywatley