Diana Ross defines icon and the queen of stage and film will once again return to Encore Theater for a run of six dates this fall.

Ross is an international treasure with a career spanning more than 50 years. She is considered the most successful recording artist and entertainer of all time.

Most recently she performed at the Queen’s Platinum Jubilee and released a song with Tam Impala called “Turn Up the Sunshine” on the Jack Antonoff–produced soundtrack for “Minions: The Rise of Gru.” In 2021, Ross released Thank You, her first album in 15 years, featuring a song produced by Antonoff.

Beyond the fabled journey and legendary successes, Diana Ross considers her greatest accomplishment to be that of raising her five children—including celebrated artists Evan Ross and Tracee Ellis Ross.

Her dream began as a young girl in the North End section of Detroit. In that city, she would create a cultural movement of racial integration and popular music called Motown. Her journey has inspired and empowered countless, celebrities, musicians, artists and young dreamers.

As the dream became a legacy, her influence touched music, fashion, stage, film and TV.

Ross’ international achievements were acknowledged by the prestigious Kennedy Center Honors in Washington DC (2007). The National Academy of Recording Arts & Sciences celebrated her remarkable career with its highest honor, The Grammy Lifetime Achievement Award in 2012.

Her portrayal of Billie Holliday in the classic film, “Lady Sings the Blues” resulted in an Oscar nomination and a Golden Globe Award. As a stage actress, she won Broadway’s top honor with a Tony Award for her one-woman show, “An Evening with Diana Ross.”

From her landmark solo career to the early days as the leader of The Supremes, Ross shaped the sound of popular music, changing the landscape and paving a way to contemporary music.

Her voice, described as “honey with soulful sensibility,” produced 14 top-ten albums, 18 No. 1 songs and music sales exceeding 100 million units around the world. 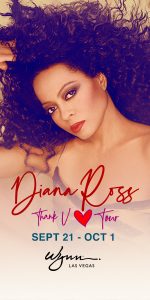