TS Madison is arguably one of the biggest names on social media and now in films!

From the ferocious comic mind of Billy Eichner (Billy on the Street, 2019’s The Lion King, Difficult People, Impeachment: American Crime Story) and the hitmaking brilliance of filmmakers Nicholas Stoller (the Neighbors films, Forgetting Sarah Marshall) and Judd Apatow (The King of Staten Island, Trainwreck, The Big Sick), comes Bros, a smart, swoony and heartfelt comedy about how hard it is to find another tolerable human being to go through life with. 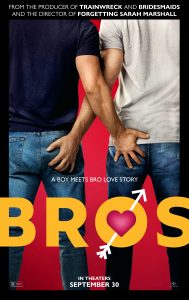 Starring Billy Eichner, the first openly gay man to co-write and star in his own major studio film—and featuring an entirely LGBTQ+ principal cast, including Luke Macfarlane (Killjoys), Ts Madison (The Ts Madison Experience), Monica Raymund (Chicago Fire), Guillermo Díaz (Scandal), Guy Branum (The Other Two) and Amanda Bearse (Married …with Children)—Bros is directed by Nicholas Stoller from his screenplay with Eichner. The film is produced by Judd Apatow, Stoller and Joshua Church (co-producer Trainwreck, Step Brothers) and is executive produced by Eichner.

To her credit The Ts Madison Experience on WE tv was a huge hit with viewers. She can also be seen hosting her own show on Fox Soul TV entitled, “Turnt Out with TS Madison.  The new hit show discusses pop culture news, the black church, transgender equality, plus-size women fashion tips, her risqué dms and cinema’s hottest releases.

a social influencer rock star, to date, TS Madison has netted millions of followers and increasing daily on Instagram, Twitter, YouTube and other multiple media platforms.

She is the author of A Light through the Shade: An Autobiography of a Queen, a television host, producer, artist, motivational speaker, media personality, for which she hosts her popular online unfiltered gossip talk show, “The Queens Supreme Court” that garners millions of viewers each week.

Madison has built her social media influencer name by walking in her unapologetic truth, as an openly transgender.

Her ability to interact with her followers (or as she likes to say, “the Maddie Mob,’) on a more personal level by regularly posting photos of her life and experiences, has made her adored, even more.

As an activist tackling stigma through storytelling, Madison uses her celebrity status to advocate for both the trans community and LGBTQ rights.

“I’m seeing changes in the community, and people now realize they’re not alone.  Now no one can ever say we, the LGBTQ community don’t exist, but we still have more work to do with educating our communities about gender and identity,” says Madison.

In 2019, TS Madison was honored in the Out magazine as one of the top 100 influential LGBT people.  “I was so humbled,” Madison stated after she heard the news.

You can also catch Madison on RuPaul’s Drag Race Untucked!

Her popular show The Queens Supreme Court on her channel garners millions of viewers which is also home to a morning show, a talent show, and a late-night show, all of them hosted by Madison herself.

A native of Miami, Florida, now based in Atlanta, Georgia, Madison’s story of growing up trans and sharing about her life on social media platforms has reshaped the way that the pubic conceptualizes transgender and gender-nonconforming identities and experiences.